JChav 1.1.0 is now available, featuring: We're not (yet) regular Maven users, so apologies if we've messed it all up and undone Tim's good work. The instructions that seem to work for us: download the 1.1.0 ZIP release; cd into the etc folder; run mvn -f maven-jchav-plugin-pom.xml install.

JChav is a way to see the change in performance of your web application over time, by running a benchmark test for each build you produce. 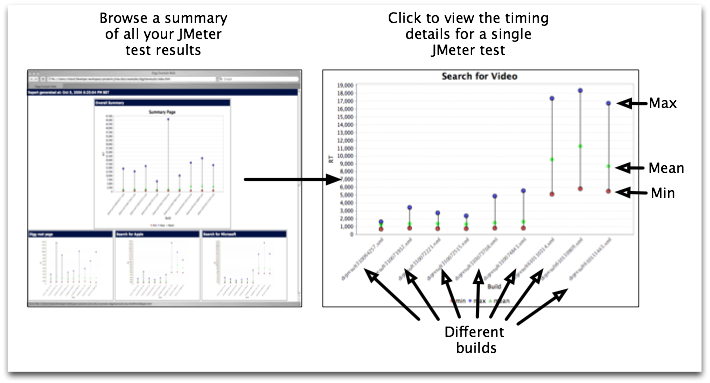 How does it work?

By running this often you can see the effect of code change on your application performance.

JChav is made available under the Apache 2.0 license.

If you would like to see what the reports look like we have a live demo of the site available here. It shows a series of threads accessing the www.digg.com site. The example section below shows the scripts used to produce these results.

If you've not used Ant or JMeter before, check out the detailed example we provide.

We think you will get the most benefit from using JChav alongside a continuous integration tool like CruiseControl or Continuum. By integrating JChav into the automated build/test/deploy cycle you get the additional benefit of being able to see if the changes made are having a positive or negative effect on performance. Those changes are immediately available to all interested parties. The typical build arrangement in ant/cruisecontrol we use is as follows : 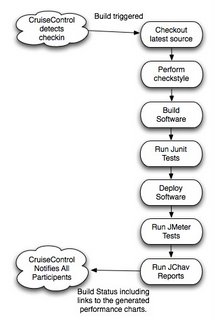 So as soon as a developer commits a change to the source code repository an automated build is triggered. The normal ant build is run including any checkstyle constraints, JUnit tests etc. The build also deploys the application before triggering the JMeter scripts and performance chart generation through JChav. The notification via email to all the build participants contains a link to the generated charts. Bringing performance monitoring into every cycle in a simple way stops any nasty suprises at a later date. Trying to add performance testing to a large establish application looks unsurmountable, but ... one test at a time, seeing the graph going the right way will help to motivate you to adding more.
Posted by Paul Goulbourn at 10/04/2006 No comments:

The first screen: showing thubnails of all the reports, and each thumbnail links to the details for the report. 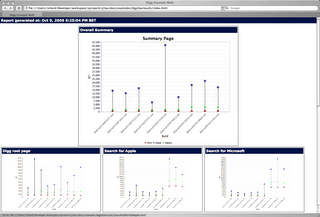 The details screen: Showing the full report for a single test and how the test ran for different builds. 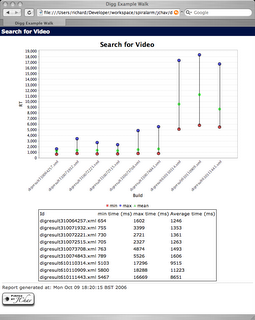 Here's an example of running a JChav, using digg.com as the subject of the test.

The first step is to produce a JMeter script that will exercise the site you wish to test. The Jakarta JMeter web pages describe how to do this in depth.

JChav produces the top level set of images based upon the labels that you put into the JMeter configuration file. So where possible give your JMeter tasks meaningful names. This is especially important if you are using the http proxy tool built into JMeter to make test generation easy. JChav will do its best to turn URLs into something meaningful, but if you take the trouble to set the name on the task the resulting pages will be better. Make sure that the test plan you have created is running as you expect it to inside the JMeter workbench. When you are happy with this script save the script as a jmx file.

We have included a small example called digwalk.jmx which performs a series of simple calls to the Digg web site.

If you'd rather jump in a use JMeter to test your own site, we've provided a localhost.jmx JMeter test which simply requests the home page of a site running on your localhost on port 80. It's a template to get you up and running quickly. Also check out the examples that ship with JMeter in their docs/demos/ directory.

Running our script from ant

JChav includes build-example.xml which is an Ant build file set up to run the digg.com tests and produce a JChav report. If you go into the jchav/docs/examples you'll see it there. Run it with ant -f build-example.xml.

If you're logged in to your computer as the user jimbo you can customize the build for your machine by creating a file called jchav/docs/examples/jimbo.properties which can contain something along these lines:

Alternatively, if you don't want to create a user.properties file, go into the docs/examples directory edit the two lines in build.properties to let JChav know where it's installed and where to find Jmeter. Then, from the docs/exampes directory, run ant -f build-example.xml. It'll take a while to run as it samples the Digg.com web site. When it's over open digjchavresults/index.html in your web browser.

How the script works

The good folks over at Programmer Planet have produced an ant task for running JMeter called Jmeter Ant Task, which is included in recent JMeter distributions in the jmeter/extras folder.

The job of this ant task is to run our tests and produce an output file containing the results. But it is important that we make sure that we produce a different output file each time we perform our tests. By default the task appends information to one file, but we want want file per run so that we can judge if the changes we have made to the software have improved or degraded performance over time.

To do this simply create a unique build id for each build performed. If you are using a continuous integration tool such as CruiseControl then use the build id for the build, otherwise use something like a timestamp. eg.

Everytime we run the jmeter target we will create a file in the ${basedir}/test/results/ directory. This is the directory that we pass to the JChav task to produce our performance graphs.

Adding JChav to the build

Initially you need to ensure that the jchav task is available for your ant build. The following taskdef will import the task :

Generate a series of charts based upon the stored data from a series of tests. The charts show the performance over time of each page tested in the script.

Runs the report setting the title page to be "Digg Example Walk".

Show me the code